While most components you'll likely use with Arduino are relatively cheap, sometimes there's the odd part that comes at a premium that's outside your budget. Here's my experience with the alternative.

I wanted to write a quick post about choosing to buy cheap (usually chinese) components over brand-name options & discuss both the advantages and disadvantages of each.

Firstly, as some background, I've just commenced work on my latest project (which is still top-secret!) and I needed to keep to a tight budget despite the high costs of some components.

The most expensive component I required was a GPS module. I already own one, yet because they're so expensive I didn't want to squander it by permanently embedding it into a small project. Most, and including the one I had orignally cost upwards of €50 to buy.

This was well outside my budget and I needed to consider other options. Thankfully, sites such as DealeXtreme and AliExpress offer similar components at a giveaway price.

Instead of the €50 plus I could've spent on a new GPS module, I chose to buy a GY-GPS6MV2 module for a little less than a tenner. Of course, the old adage is still true - if something sounds too good to be true, it probably is.

If you're not experienced with what you're buying or still feel like a rookie, you're probably best off with the safer option. That said, there's very little risk in buying something that's so cheap.

In fairness, there's a lot more wrapped up in the price when buying the more expensive option than just the product. Brand names such as Sparkfun tend to invest more in resources to complement the product and you're likely to find more support and community help too.

Here are a few of the disadvantages to consider when buying low-priced components:

None of this is terribly new - it's the same for anything you buy. However, it's important to be conscious when purchasing components. Sometimes, you're better off with the pricer option to avoid the occasional headaches.

Anyhow, before I return to the raison d'être behind my blog post I'll just list the advantages - opting for the cheaper option: 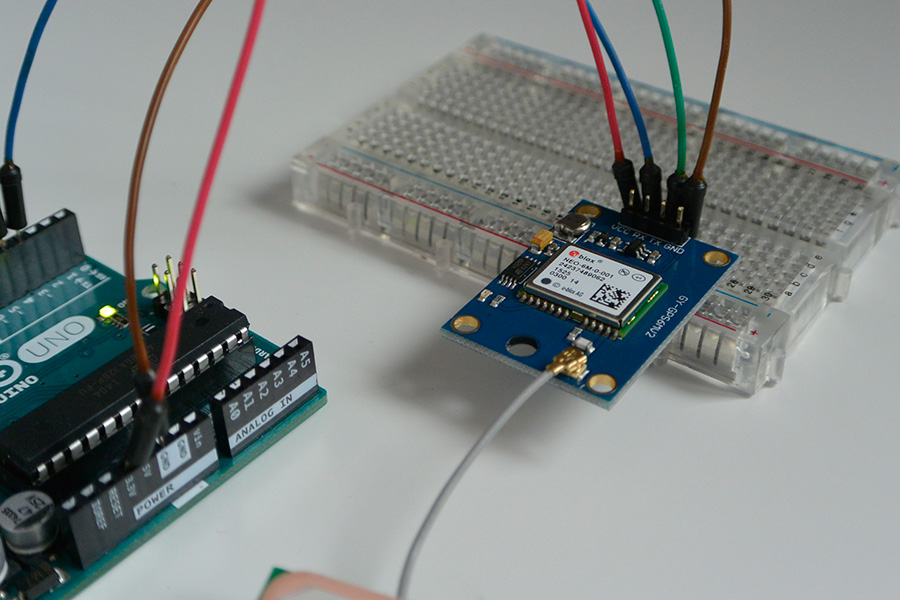 As I mentioned, for this project I happened to require a new GPS module for my project. I decided to buy the GY-GPS6MV2 on AliExpress based on the price and also from what I read online.

Before buying a product - especially a cheaper option, look up online to see if anyone else has tried using it before. You can easily discover if it's defected in some way or difficult to interface with.

I was pleasantly surprised with the GY-GPS6MV2 module - notably for something at such a low-cost. Besides the module itself, you'll also need a four-pin header to solder on. Easy to solder too.

If you felt like it, there's a pad at the back of the module where you could attach the antenna

Starting with the code first, download the TinyGPS library here and boot up the test_with_gps_device example sketch.

Having wired-up the board, changing and uploading the code, you can open the Serial monitor at 9600 to see if the GPS is working. If you're lucky, you should see a steady stream of data coming through telling you of your location. 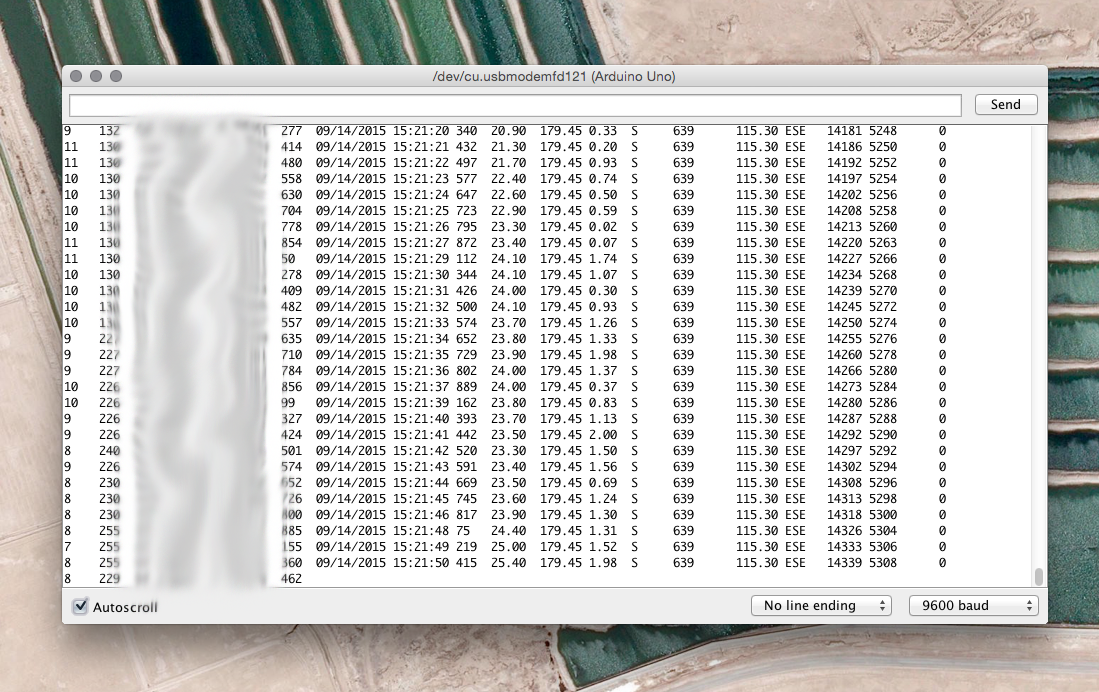 Note that the LED on the module is not a power LED so don't feel disheartened if it doesn't light straight away when you power your board. It's an indicator - blinking when it has a satellite lock. 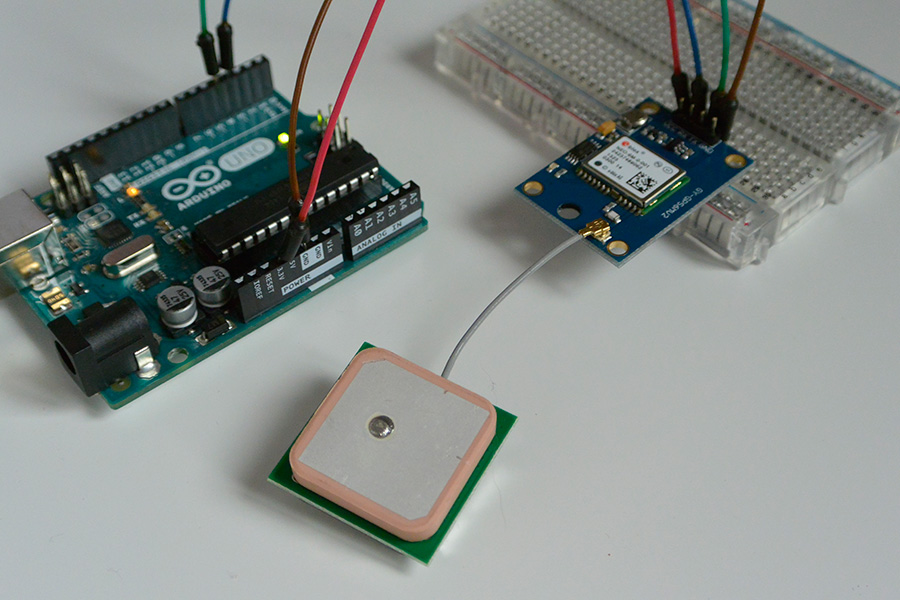 If you're unlucky like me, you might have a serial monitor filled with asterisks. Don't despair! If you're seeing the blinking light onboard, that's a good sign. If you can determine that it's receiving data, it's likely you've done something wrong on setup. 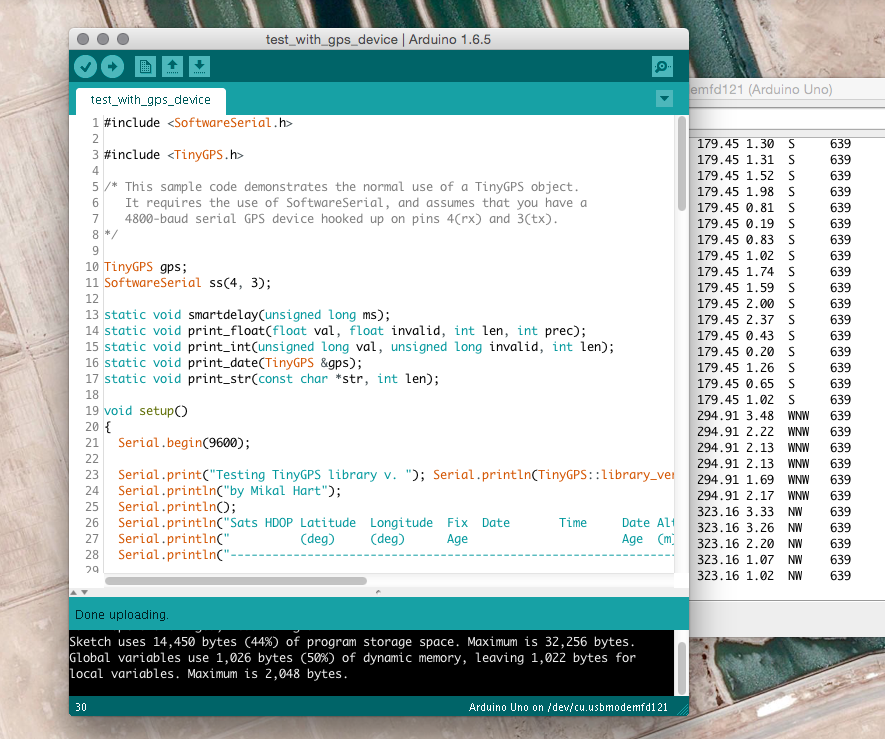 In case you're wondering about the inclusion of SoftwareSerial, it's down to the Uno having only two physical ('hard') serial ports - pin 1 (TX) and pin 0 (RX).

The GPS requires the use of the TX and RX of the Arduino, but how are you going to view the data over the serial monitor then? The data must be read in on a software serial port (usually pins 4 & 3 or pins 11 & 10) and then sent back over the hard serial ports - pin 1 & pin 0.

Well, there you go. I hope I threw some light on choosing between cheaper options versus more expensive solutions. I'm quite pleased after saving myself €50 on a new GPS. It's early days yet but I'm impressed how simple the GY-GPS6MV2 was to setup.

Stay tuned for more posts as I embark on my next Arduino project!